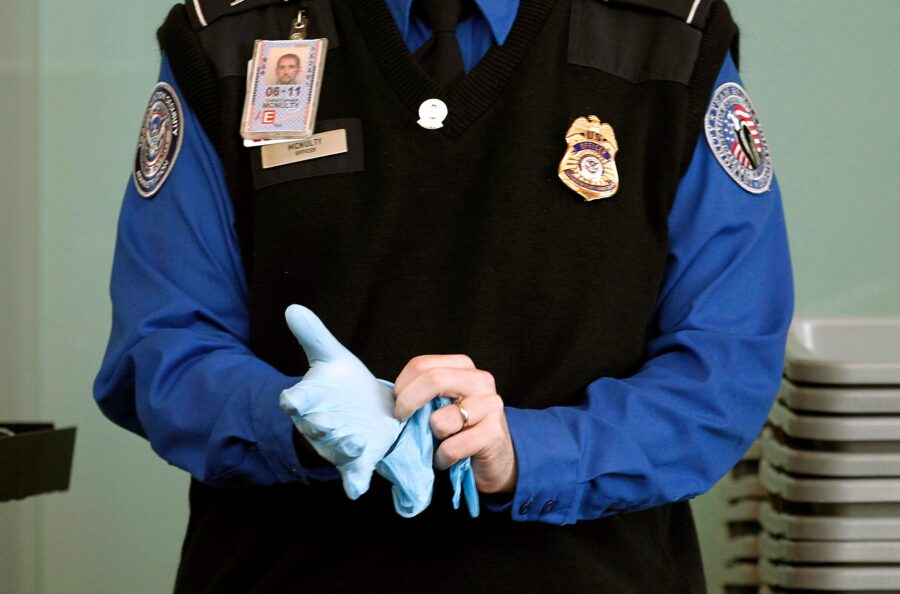 DEMING, NM — A man has filed a lawsuit stating that a traffic stop led to a series of forced medical procedures when a police officer thought he was clenching his butt cheeks.  His lawsuit says that without his consent, he was taken to a medical facility and where he was forcibly X-rayed multiple times, sedated, given several enemas, required to give multiple stool samples, subjected to fingers penetrating his anus during multiple cavity searches, followed by an actual colonoscopy where cameras probed his intestines for drugs.   The startling 14-hour ordeal failed to find any contraband inside his body.

The incident happened on January 2, 2013, when David Eckert says he had just wrapped up shopping at a Wal-Mart store in Deming.  As he pulled out of the parking lot, his vehicle allegedly did not stop completely at the posted stop sign.  Deming police promptly stopped his car and began fishing for charges that they could apply to him.

While stopped, Eckert was required to exit the vehicle by police officers intent on searching his car.  Police claimed that a dog told them that Eckert’s seat smelled like narcotics and claimed that his butt cheeks appeared to be clenched.

Eager to get an arrest, police conspired to search Eckert’s anus for contraband.  They took him into custody and got a judge to stamp out a search warrant for Eckert’s intestines.

Police were turned away at a Deming emergency room, after a doctor told him that the search was “unethical.”  But that jarring statement wouldn’t be enough to sway police officers from seeking another place to violate Eckert’s body in the name of prohibition.

Medical professionals at the Gila Regional Medical Center in Silver City were more than happy to comply with the police in their hunt for drugs.  After a few hours, Eckert was admitted to the hospital and a grueling series of examinations began.

According to medical records and the lawsuit examined by KOB4 Eyewitness News, the Eckert’s captors performed the following procedures on him:

At no point was any evidence of narcotics found.  The humiliating procedures took 14 hours, according to KTVU.

“It’s a nightmare, its unfathomable. You could never anticipate this happening in the United States of America,” said Shannon Kennedy, the victim’s lawyer, adding that in 18 years of practicing civil rights law, “this may be the most egregious case I have ever seen with law enforcement abuse.”

America’s Drug War practices may sound like science fiction but it is indeed a disturbing reality that citizens can be raped by the state — figuratively or literally — in the name of finding drugs.  Unfortunately things have sunk that far.

The DOJ’s own definition makes this a very clear case of rape.   But somehow a piece of paper signed by a judge makes it a “legal” and acceptable practice.

Rape is:  “The penetration, no matter how slight, of the vagina or anus with any body part or object, or oral penetration by a sex organ of another person, without the consent of the victim.”

Any protesting or resisting on the part of the victim could have resulted in the use of violence on him and punishing legal charges.   Eckert was forced to endure more than half a day of demented torture because of a suspected victimless crime.

Additionally, the search warrant expired at 10 p.m., while doctors didn’t even begin prepping Eckert for the colonoscopy until 1:00 a.m. the following morning.

“What is so strange about this case is they held him with no evidence,” Kennedy said. “They seized him to collect evidence, to go on a fishing expedition on someone’s body.”

The police K-9 that signaled on Eckert’s car, named Leo, gives wrong signals “pretty often,” reported KOB4 Eyewitness News.  The dog wasn’t even certified in the state of New Mexico, and his certification had been expired since April 2011 — well past the annual re-certification requirement.  His handler was Hidalgo County Sheriff’s Deputy Patrick Green.

It would seem that the faulty use of the search warrant, the use of an unqualified dog, and the egregiousness of the cavity search would have led to some disciplinary action within the police department.  How were the conspirators disciplined?  Rather than getting fired and arrested, Detective Sergeant Bobby Orosco was promoted to patrol captain following the incident.

The doctors’ compliance to these disturbing orders reflects the outcome of the Milgram experiment, in which unwitting research participants were able to be convinced by a figure of authority to participate in a staged electrocution of an innocent person.  As Stanley Milgram demonstrated in 1961, the vast majority of people can be led to commit atrocities if the “authorities” compel it.  Even respected and educated members of the community will violate a person for hours, if a man with a badge tells them its OK.

After hosting the medical rape session, the Gila Regional Medical Center billed Eckert $6,000.00 for the trouble and is threatening to take him to collections if he doesn’t pay.

The wild-goose chases for drugs in the anuses of innocent drivers is only one of the more visible injustices in a broader menace: the deadly and oppressive War on Drugs.  Are body cavity searches really any more insane than having masked men raid homes at 3:00 a.m. to find plants and substances?   The situation has been out of control for a long time.  The perpetual quest to stop people from getting high has proven over and over how quickly men can be turned into monsters, and well-meaning laws ultimately result in tyranny.  Economically, politically, and socially, the Drug War is far worse than problem it purports to solve.

Here is KOB4’s interview with the police department:

David Eckert has settled with the city and county that probed his anus.  Hidalgo County will pay $650,000 and the City of Deming will pay $950,00o, totaling $1.6 million, reported KOB-4 News.

Eckert’s defense team say they were grateful for the media attention.

“The gratifying aspect of this case is the media attention that it has gotten and the opportunity for discussions in the law enforcement and medical communities about how to deal with these opportunities and what to do with requests from law enforcement about medical exams for people in custody,” Eckert’s attorney Joseph Kennedy said.

Kennedy is being generous in his statement about the media.  Save for a few local news stations and online watchdog websites, the case went largely unnoticed. The national media gave little mention of this case, if any.  It should have presented the country with a golden opportunity to have some in depth discussion and analysis on the Drug War and all its injustices.

To our knowledge, Officers Bobby Orosco and Robert Chavez have not faced any public discipline and are still stalking the streets of Deming.

The doctor who forcibly stuck his fingers into a hostage’s anus has been reprimanded by the New Mexico Medical Review Commission.

Attorney Shannon Kennedy informed KOB4 that the panel agreed unanimously that there was “a reasonable probability” that the doctor involved, Dr. Okay Odocha, committed “professional negligence” and committed harm to David Eckert.