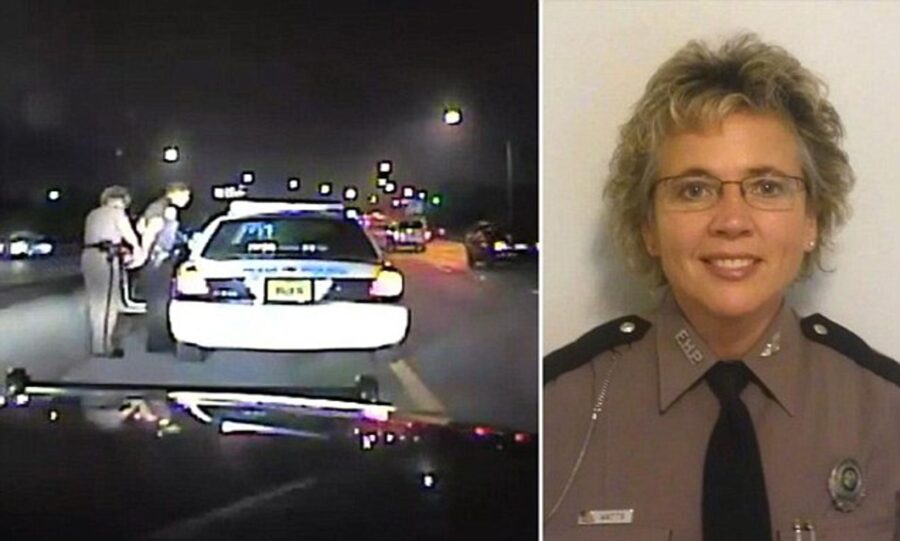 MIAMI, FL — After a Florida trooper showed integrity and equally applied the law to one of her fellow officers, she experienced months of harassment, invasions of privacy, and situations that felt so “life threatening” to her that she moved to another county.  She has filed a lawsuit against over 100 cops named individually and over 200 that remain anonymous for their violations of the law and retributive actions against the honest cop.

On October 11th, 2011, Florida Highway Patrol Trooper Donna “Jane” Watts was patrolling her section of highway when she was passed by a marked police cruiser identified as belonging to Miami PD.  The cruiser was traveling at break-neck speeds and was not using its emergency lights or sirens.  Not giving the speeder a break because of his profession, D.J. Watts set off to get to the bottom of the situation.

Dash cam records show that Watts turned on her emergency lights at 6:28:45 a.m.  She struggled to keep pace with the Miami police cruiser, which was zipping between cars, going at speeds up to 120 miles per hour.  The driver was so far ahead that it is unclear if he even noticed that Watts had sped up and began a pursuit.

The chase went on for several minutes.  About 6:33:15 a.m., dash cam footage shows that Watts had sufficiently closed the gap with the speeding cruiser, and was trailing him within a close, visual distance with her emergency lights still flashing.  The speeder ignored her signals and sped onward, undeterred.

She blared her loud sirens, yet still there was no response.  The cruiser continued to whip through traffic, with Watts on its tail.  Watts aimed the beam of her bright spotlight at the speeder’s rear window.  This too was ignored.  It was not until 6:35:30 a.m. when the speeding cruiser finally came to a halt.

For those keeping track, the chase went on for a total of 6 minutes, 45 seconds.   Even using a more conservative measurement of 2 minutes, 15 seconds — the amount of time Watts was directly behind the cruiser — this was a considerable amount of time to ignore (and evade) the trooper.

Watch the highlights of the pursuit below.  (Full length here.)

Trooper Watts cautiously approached the car, now parked on the shoulder of the highway.  After trying to evade her for several minutes, she had no reason to believe the encounter would be amicable.  She drew her pistol and slowly closed in.

“Put your hands out that window right now!” she loudly announced.  When ignored, she turned up the intensity and repeated the command again.

As she walked up to the driver, she must have been met with disbelief.  She can be heard on video, saying, “Oh yeah!  I’m serious!”

“Get out of the vehicle!” she directed him.

Lopez — attempting to give excuses — was immediately told to turn around and face his cruiser and was slapped into handcuffs.

Now apologetic, Lopez began trying to explain.  “I was on my way to an off-duty [job]… a school…”

Lopez continued with the excuses, and tried to talk his way out of the handcuffs.  “I didn’t know you were stopping me, officer!  With all due respect—”

“This is not a first time occurrence with y’all,” Watts stated later, as more officers arrived on the scene.   “Y’all come from that way ALL THE TIME — this Miami police car — and we never catch it!”

Officer Lopez was put in the backseat of the cruiser and charged with misdemeanor reckless driving.

An Army of Bad Apples

The incident caused a firestorm of discussion among law enforcement and the public.  The dash cam video went viral.  Many applauded  Trooper Watts for her willingness to take on lawbreakers hiding behind the uniform — a seemingly uncommon trait among those in her profession.

Some, however, were not so supportive of her efforts.  Soon after the incident, she was suffering from constant harassment.

Watts says she would receive threatening phone calls from strangers.  She would subjected to juvenile pranks like having pizzas delivered to her house which she did not order.  She was stalked by police cars and unfamiliar vehicles idling in the cul-de-sac outside of her home.  Sometimes she would be tailed around town for no apparent reason.

The gang-like harassment of D.J. Watts became so severe that she felt in fear for her life, and afraid to do normal things like go outside and check the mail.  The stress began to take a physical toll on her, and she began living like a hermit and eventually moved out of the county.

After filing a public records request with the Department of Highway Safety and Motor Vehicles, Watts discovered that her personal information had been pulled up by scores of officers from 25 different jurisdictions.  Her data had been accessed more than 200 times total.

“This is an invasion of privacy,” said Watts’ attorney Mirta Desir to the Sun Sentinel. “Law enforcement does have access to information most residents don’t and with that level of access there should come a certain amount of care. … This is something that is not supposed to be done.”

Watts fired back against the corrupt gang, filing a 69-page lawsuit, citing grievances against 100 different officers from 25 different jurisdictions.  Additionally, there were over 200 unidentified violators from several different agencies listed in the complaint.

The Driver’s Privacy Protection Act (DPPA) is a federal law that protects individuals from having their information improperly accessed.  Violations can result in a $2,500 fine per incident.

“You don’t even know you’ve been looked up unless you make a concerted effort to find out,” explained her lawyer.

Litigation between all the various parties and Watts is sure to take some time.  A few agencies like Lauderhill and Margate have already reached settlements with Watts.  In addition, some of the offending officers receive “letters of reprimand.”

But police state lobbyist groups like the National Association of Police Organizations (NAPO) don’t think that’s fair.  They believe officers should be able to access private individuals’ information freely without retribution (unless sold for money).

NAPO is now “aggressively lobby[ing] members of congress” to alter the Driver’s Privacy Protection Act.  This would remove a barrier of privacy for individuals who might suffer from gang-like harassment as D.J. Watts experienced.

If they are successful, activists, whistleblowers, and honest cops will again be easily targets of harassment from the police state.