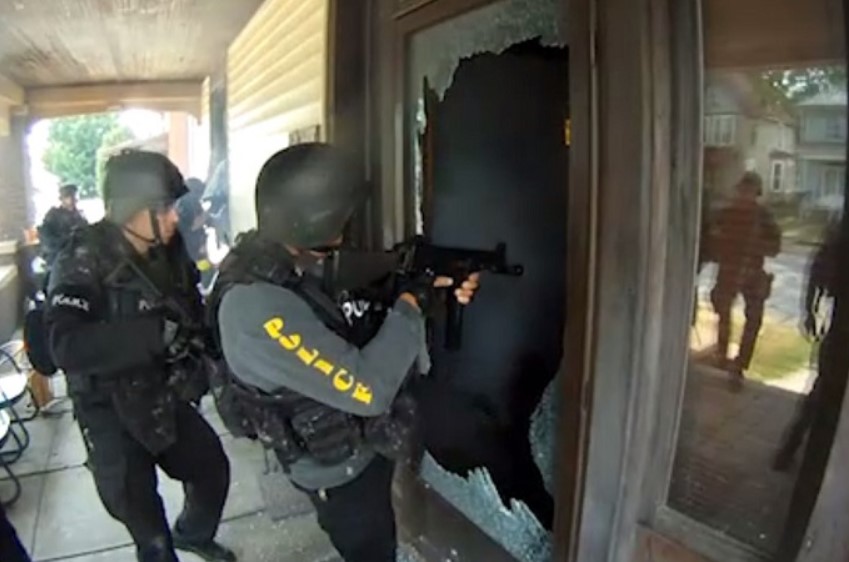 EVANSVILLE, IN — An innocent elderly woman’s home was raided by SWAT when she was suspected of using the internet to trash-talk and post threats toward the local police.  In response, gun-wielding assailants breached her doors and windows in a violent search for electronic evidence.

The hair-raising incident took place at the household of Louise Milan on Powell Street.  It was the place where she and her husband had raised their six children, and had lived for three decades.

On June 21, 2012, the solitude of the familial home was shattered — along with numerous doors and window panes.  Louise Milan, 68, was home with her adopted daughter, 18-year-old Stephanie Milan.  Around midday, Louise had been straightening her bedroom when she heard a terrifying sound from downstairs.

“I hear this noise, and I’m thinking something’s hit the house,” Louise recalled in her deposition.  “Then I think the world has come to and end,” she added, when she heard “the second bang.”

The terrified grandmother, who had endured multiple heart surgeries to treat her atrial fibrillation, immediately thought of Stephanie and headed for the stairs, screaming in panic.  She said that she was met half-way down the stairs by an unidentified intruder holding a rifle.

“He’s pointing his gun at me, and he’s saying ‘Get on the floor,’” Louise recalled.

What Louise Milan didn’t know at the time was that her home was being raided by the Evansville Police Department’s SWAT team.  The deafening “bangs” she heard were the sounds of concussion grenades exploding in her downstairs living space, shattering windows and damaging property in the process.

As the Hoosier grandmother was handcuffed on the floor, the intruders swiftly cleared the rooms with guns raised.  They soon found Stephanie, who had been watching television and was cowering on the floor when they entered the living room.

“Don’t hurt me!” the girl pleaded, face down near the sofa.  SWAT agents moved in with rifles pointed at her tiny frame and demanded that she stand up to be handcuffed.

Both women were shackled and “marched down the street in front of neighbors,” Louise recalled.  “I don’t think we deserved that.”

SWAT officers had breached the home’s doors and windows in what authorities deceptively call a “knock and announce” entry.  Officers technically knocked, yes, but video clearly shows that they began shattering glass no more than three (3) seconds after the impatient rapping on the door began.  A raid performed in this fashion is, for all intents and purposes, indistinguishable from a veritable “no-knock” entry.

The officers, in their hasty aggression, had used a battering ram to shatter a glass storm door.  The team intentionally broke other windows and detonated two flashbang grenades inside the house.

“The front door was open,” said a shaken Ira Milan, who had not been home at the time. “It’s not like anyone was in there hiding. To bring a SWAT team seems a little excessive.”

The ostensible reason for the raid was that someone had anonymously posted some internet tough-talk on an online discussion forum, and referred to the Evansville police.  The subsequent violence directed at the Milan household was to serve a search warrant to find out who was responsible.

The alleged “specific threats” were posted in a discussion on the topix.com website. One of the posts declared: “Cops beware! I’m proud of my country but I hate police of any kind. I have explosives… Made in America. Evansville will feel my pain.”

In response, police packed their own guns and explosives and headed out to raid the owner of the IP address from which the posts had been made.  That address belonged to the Milan family.

Police confiscated Stephanie’s cell phone and laptop to see if they was related to the internet threats.  They weren’t.  In fact, it was determined that no one in the Milan household had been involved.

The Milan family was wrongly targeted because their wireless internet signal had been had been discreetly used by an unauthorized remote user. A neighbor, Derrick Murray, had noticed that the Milans had not password-protected their wireless router, and accessed it without permission via his smartphone and used it to browse the internet from his parents’ house.  He was later arrested by the FBI and plead guilty to related charges of using forbidden speech.

Defending the raid, Evansville city attorneys argued the force used to execute the search warrant was “objectively reasonable” and that the police are immune from liability.

Louise Milan, however, did not believe the raid was reasonable.  In fact, she believed the raid showed a “callous indifference” to her family, and filed a lawsuit against the City of Evansville and EPD.

“I think they could have handled it…different,” Louise said in a deposition.  “There were bicycles for toddlers lying in my backyard.  There were three bicycles lying right there by my back gate… There’s a Fisher Price car seat, toddler seat, sitting right there on my front porch, and it was there that day.  And like it didn’t seem to matter.”

Evansville Police Chief Bill Bolin, who was named as a defendant, said this so-called “knock-and-announce” technique is employed as a standard.

Ms. Milan, however, apparently missed the 3-second knock prior to the shattering glass and explosions.  “They could have knocked.  I didn’t even know there was a search warrant,” she said. She did not know police could break in by surprise, and did not even know what a flashbang was until two were detonated in her house.  “[I thought] they were supposed to present you with a search warrant,” she added.

Louise said that after the experience, her view of law enforcement has changed dramatically.

Ms. Milan added that she believes the raid was about retribution and intimidation moreso than genuine concern for officer safety regarding the online postings.  “I believe that they were showing us that because ‘you’ threaten us, we’re going to let you know that you can’t threaten us and get away with it.  Just high-fiving… They were having a show of force.”

In August 2014, a helmet-cam video recorded by one of the officers was released — confirming the Milans’ account of what happened.

Interestingly, both the plaintiffs and defendants believe the video helps their case.  The Milans believe the video shows officers acting negligently and violating their constitutional rights, and the government believes the officers were shown to be “respectful” to the women — after pointing rifles at them and breaking their stuff.

The footage provides some insight on the procedures and attitudes held during a typical raid.  The tactics are swift, violent, and reckless.  View the video below:

The “knock” was clearly used only as a distraction measure and was never intended to be a request for permission to enter the home.  Generally speaking, the tactic also allows police to provide the public with more acceptable semantic descriptions of their actions, avoiding police state imagery through dubious word games.

SWAT operators were filmed displaying their appalling lack of weapons discipline.  Officers casually pointed their rifles in unsafe directions — violating the most elementary of firearm safety rules — as they swept past multiple houses and windows with loaded weapons.  Inside the Milan house, Stephanie appeared to have at least one rifle pointed at her prone body.   Louise attested to the same treatment.  As every student of firearms training knows, one should “never aim a weapon at a target you aren’t willing to destroy.”

Officers were filmed joking and carrying on before and after the raid, indifferent to the trauma and rights-violations they had just caused or were about to cause.

“That f***ing ram hit a lot harder than I thought it going to hit,” one officer joked as the others laughed, while standing in the Milans’ living room after the two women had been hauled away in handcuffs.

“Wouldn’t it have been funny if it would have bounced off?” another giggled, followed by more laughter.

Evansville police “committed too many mistakes to pass the test of reasonableness” in a bungled home search and are not shielded from a federal excessive force lawsuit, the 7th Circuit Court of Appeals ruled on July 31st, 2015.

The eight-page opinion (PDF) affirmed denial of summary judgment for the Evansville Police Department on Milan’s excessive force claim, upholding a ruling by Judge William T. Lawrence of the U.S. District Court for the Southern District of Indiana, Evansville Division.

The appellate judges related the Evansville Police Department to the “Keystone Kops” and called the events related to the bungled raid “almost inconceivable,” “dangerous” and “disturbing.”

“The members of the team are seen on the tapes impressively clad in body armor and big helmets and carrying formidable rifles pointed forward. It would take a brave criminal to try to fight it out with them, and of course there was no criminal in the house and little reason to expect one to be there,” Judge Richard Posner wrote for the panel.

“The members of the SWAT team rushed to the front door of the house, knocked, and without allowing a reasonable time — more than a few seconds — for a response … broke open the front door and a nearby window, and through these openings hurled two ‘flash bang’ grenades. … The police call them ‘distraction devices,’ an absurd euphemism; we called them ‘bombs’ in Estate of Escobedo v. Bender… and United States v. Jones… Precipitate use of flash bangs to launch a search has troubled us before, leading us to declare that ‘the use of a flash bang grenade is reasonable only when there is a dangerous suspect and a dangerous entry point for the police, when the police have checked to see if innocent individuals are around before deploying the device, when the police have visually inspected the area where the device will be used and when the police carry a fire extinguisher,’” Judge Posner wrote.

The panel noted that police had observed the guilty party, neighbor Derrick Murray, sitting on a porch a few doors down before the raid. He had been previously convicted of intimidation for threatening police, and he later pleaded guilty to using Louise Milan’s wireless internet to post the threats in this case.  He was sentenced to spend 16 months in prison and then 3 years on supervised release.

“It took them only a day to discover that it was indeed he [Derrick Murray] who was responsible,” Judge Posner wrote. “But rather than give him the SWAT-team treatment, the police politely requested that he come to police headquarters, which he did, where he was arrested without incident. … The police department’s kid-gloves treatment of Murray is in startling contrast to their flash-bang assault on Mrs. Milan’s home.”

“So while the defendants are correct to point out that a reasonable mistake committed by police in the execution of a search is shielded from liability by the doctrine of qualified immunity,” the panel concluded, “in this case the Evansville police committed too many mistakes to pass the test of reasonableness.”